A brace from Dylan Sheridan has helped Ireland to a 4-1 win over the Pararoos in their second match at the 2015 Cerebral Palsy Football World Championships.

The Irish dominated the opening exchanges in London but only took a slender one goal advantage to the break, with Australia's Men’s Paralympic Football Team also creating several chances.

Captain David Barber pulled a goal back for the Aussies from the penalty spot after Ireland had doubled their advantage, but two late goals sealed the result at St. George’s Park.

Hoping to back up their commanding 2-0 win over Portugal coach Kai Lammert made just two changes to the starting seven, with Jack Williams and Thomas Goodman coming into the side.

However it was the Irish that were able to dictate terms early on and they scored the opener with an opportunistic strike from distance.

Goalkeeper Chris Barty will be disappointed he didn’t do better as he spilled the shot when appearing to have it covered, although he may have seen the ball late due to a congested box.

The Aussies pressed for an equaliser after the break but it was Ireland who again found the back of the net courtesy of a cracking long-range strike from Sheridan.

The Pararoos got themselves back in the match shortly after when Barber was judged to have been brought down in the box while trying to get a shot away.

The skipper was composed from the spot, a powerful drive beating the goalkeeper on his right side to reignite hopes of a comeback.

Unfortunately it was Ireland who pulled further ahead in the closing stages with two more goals rounding out the 4-1 result.

The loss leaves the Pararoos precariously placed in their group with a win and a loss from their two matches in Group B.

Kai Lammert's side will need a result against Russia, who have amassed 16 goals and only conceded once, on Saturday in order to be a chance of progressing to the quarter-finals of the competition. 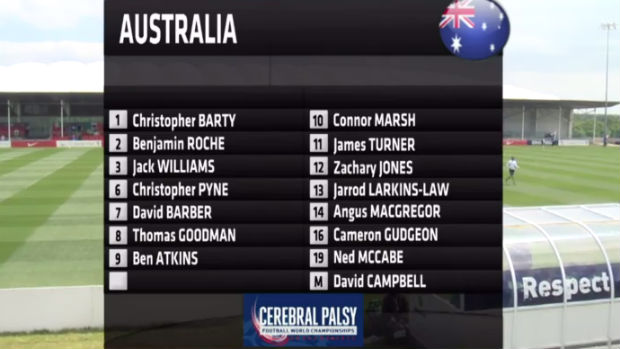