The funding model will allow the resumption of the Pararoos program under the FFA National Team structure by leveraging the groundswell of support for the team and enabling the community to make tax deductible donations in support of the Pararoos international competition pursuits.

Speaking at a media conference today, Gallop said he was delighted to announce that the Pararoos would be back in action after the Australian Sports Commission withdrew funding for the Paralympic football program in June last year.

“FFA has looked at several options to restore funding to the Pararoos and the partnership with the Australian Sports Foundation was clearly a winner,” said Gallop. “All the funds raised through this partnership will go towards keeping the Pararoos on the pitch.

The Australian Sports Foundation Chief Executive Officer, Patrick Walker, is a passionate football fan and his knowledge and support for the Pararoos cause has been instrumental in shaping this new direction.

“This campaign is important for ensuring the Pararoos are able to compete at the highest level, just like the Socceroos. However, if anything, it is more important for the inspiration the Pararoos provide to all Australians challenged by disability, I urge the football community to get involved and support the Pararoos,” said Walker. 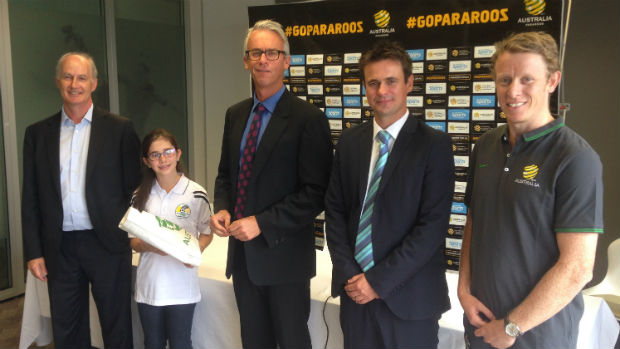 Gallop also acknowledged the tremendous support of the wider football family for the Pararoos.

“I would like to thank all the supporters of the Pararoos, and in particular the efforts of young Claire Falls from the ACT, who signed petitions, contacted media organisations and made representations to elected members of Parliament in championing the cause during the difficult times.

“As a result of your passion, we have the confidence that the Pararoos will have a long and bright future.”

“Kai is no stranger to the Pararoos set-up having been the assistant coach for the past nine years,” said Gallop.

“We will support Kai to set-up his coaching and support staff to ensure that the Pararoos are best prepared for their tournaments ahead.”

The Pararoos will also adopt the FFA National Curriculum for Paralympic teams across state and national programs. Planning is underway to include women’s program within three years.

The goal is to have a whole of disability’ football program including deaf and blind football as well as powerchair and other disability-focused programs.

The Pararoos will go into camp later this month in Sydney to prepare to compete at the 2015 CPIRSA World Championships in the United Kingdom in June.

For information about the Australian Sports Foundation please visit  www.asf.org.au