The Pararoos have claimed a 2-0 win against Spain in their opening IFCPF World Championships qualifier as they bid to book a place at next year’s tournament in Argentina.

Australia’s Paralympic Football team netted in either half, with Ryan Kinner and Benjamin Roche the goal scorers in Vejen, Denmark.

Meanwhile Matthew Hearne and Nicholas Prescott made their international debuts, with the latter setting up both the goals for the Aussies.

The Pararoos launched a blistering counter-attack to open the scoring with Kinner showing great composure to thread the ball past Spain’s goalkeeper.

The side again went the length of the field to double their advantage after the interval with some tika-taka football leading to Roche firing into the roof of the net from an acute angle. 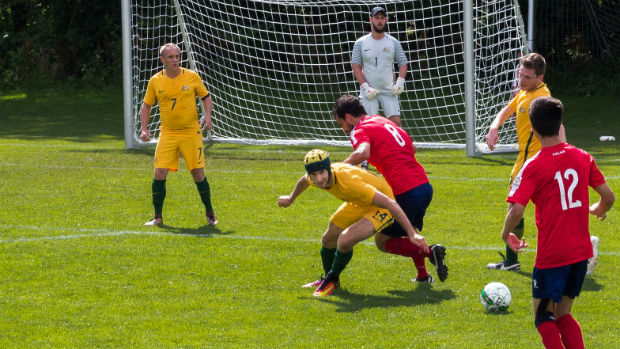 Coach Kai Lammert was pleased with the performance from his side, feeling the Pararoos controlled the tempo of the match despite the squad having several new faces.

“This brings us closer to qualification for the 2017 World Championships,” said Lammert.

“A big compliment to the boys as they have worked extremely hard off and on the field in their preparation for this tournament and it paid off today.

“Congratulations to Matthew Hearne and Nicholas Prescott for making their Pararoos debut.

“We have seven new players who have learnt the Australian style of play in an extremely short period of time.

“We played some great attacking football and we worked very hard in defence which did not allow Spain to play their regular game.”

The Pararoos next play Scotland in their group as they bid to finish as one of the top eight sides at the 13-country tournament.

Click here for more information on the qualification tournament.