‘I had the legs of an 85-year-old’: How Pararoo Chris Barty beat the odds through football

Before he became a Pararoos stalwart, Chris Barty was at a fork in the road.

As a 21-year-old government worker with no interest in football, Barty’s forthcoming career as an international goalkeeper seemed a world away, but a startling medical revelation forced Barty to find a way get active.

And through football he found a remedy.

“I started playing football at the age of 21,” Barty said.

“I wasn’t that keen to play because I never really had an interest in football.

“My disability affects both my legs so with it being football it seemed a bit counterintuitive to play the sport.”

There's a huge week of CP (cerebral palsy) football on over the October long weekend. Click here to learn more about the 2019 National CP Football Championships.

But through his job at the Department of Sport and Recreation, Barty was introduced to the game and saw an opportunity to help it flourish in Australia.

“Myself and (former Pararoo) David Cantoni got together and had a chat about how to develop the game,” Barty said.

“It got to a point where we needed to understand more about the classification process...we needed a guinea pig to go and get classified.

“I jumped on the table and they said, ‘are you aware you’ve got the legs of an 85-year-old?’ Being 21 that was a bit of a shock, and not something I particularly wanted to hear.

“It was either play football or sit on a physio table, and it was a pretty obvious choice from there.”

Barty’s venture into football has led him to a point where his achievements at both the National CP Football Championships and with the Pararoos reflect what has been a decorated 10-year playing career to date.

But back when it all began things didn’t always go to plan.

“After chatting with David (Cantoni) about it, he identified goalkeeping as the way to go,” Barty said.

“I had a background playing basketball and although my feet were terrible my hands weren’t too bad.

“From there I approached a goalkeeping coach, sent him an email and said, ‘G’day mate, my name is Chris Barty and I’m going to play for Australia one day’.

“I’d never done anything (like it) before, so I turned up to goalkeeper training in runners and I didn’t have any gloves.

“He would have been well within his rights to send me packing, but thankfully he saw I had good intentions and I was there to do the right thing.”

Fast-forward to today and Barty heads into the 2019 National CP Football Championships in what is his ninth Nationals tournament, and the 31-year-old goalkeeper is confident his Western Australia side can win gold for the first time.

“From a team perspective our aim is to make the final,” Barty said.

“This WA team has a sense of cohesiveness and togetherness we haven’t had for a couple of years.

“We’ll be competitive with everybody; there’s no fear for us.” 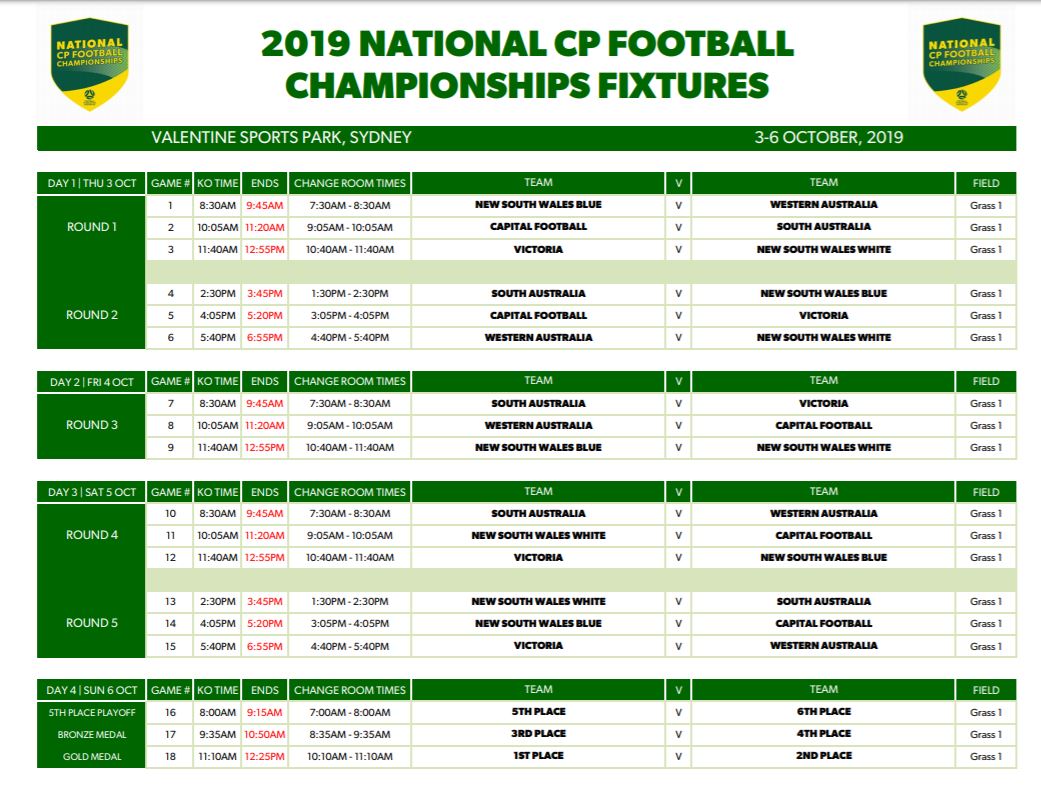 When WA play at the tournament in Sydney's west, success won’t be the only thing driving Barty.

Along with his will to win comes a much deeper motivation.

“The biggest thing for me is to meet other people with CP and stroke and realise that you can have it all,” Barty said.

“Just because you have a disability it doesn’t mean anything is beyond your reach.

“Within this team and competition not only do you make lifelong friends but you have the opportunity to share information and stories and create bonds, not only friendships but strategies to get through the challenges of life.

“I was just nominated for local council elections and I had to do letterboxing; I’ve walked a marathon over the last two days.

“Going from having the legs of an 85-year-old and not being able to run from fifteen minutes to being able to at least walk a marathon is something I’m really proud of.

“Little things like that are the best things about football.”

Australia's Pararoos are set to assemble for the first time since their emphatic 5-0 home win over Canada in November 2019 when Coach Kai Lammert oversees a training camp at the Australian Institute of Sport (AIS) in Canberra this weekend.  Twenty (20) players from across the