New South Wales have continued their dominance at the National Paralympic 7-A-Side Football Championships taking out their sixth consecutive title in Coffs Harbour.

New South Wales were the defending champions and they were not prepared to hand over their title.  This final had all of the hall marks of a typical state of origin match as this was the 11th time NSW and Queensland had met in the decider. The count before the start of the match was New South Wales 9 and Queensland 1.

The game had a couple of very interested spectators in former Socceroo and current FFA High Performance Manager Luke Casserly and the Eric Abrams the new FFA Technical Director.

NSW were determined not to give up their title from the very start but it was one of the newest NSW players who put his mark on the game when in the 7th minute Harrison Dowdell finished and excellent attack from NSW. NSW continued to press the Queensland defence and managed to score again in the 20th minute through Jack Williams.

The NSW team went further ahead in the 32nd minute through a brilliant strike by the NSW Captain Chris Pyne. It wasn’t long before NSW put the game almost out of the Queenslanders hand when 14 year old Harrison Dowdell scored his second for the match.

It wasn’t until the 56th minute that Queensland managed to get on the board, which was from the penalty spot after a hand ball by one of the replacement players for NSW. The Queensland Captain stepped up and took a very good penalty making the score 4-1.

It was the experience of Pararoos player Ben Roche that proved the difference between the two sides when he opened the scoring in the 8th minute of the game.

The South Australian’s fought very hard and were unlucky not to get an equaliser before half time.

The second half was an arm wrestle and it was South Australia Pararoo Thomas Goodman who came the closest. However the turning point of the match came in the 50th minute when South Australian Captain and Pararoos player Ryan Kinner had to go off injured.

The Victorian’s took advantage of this and scored a second goal in the 53rd minute.  This goal was scored once again by Ben Roche. 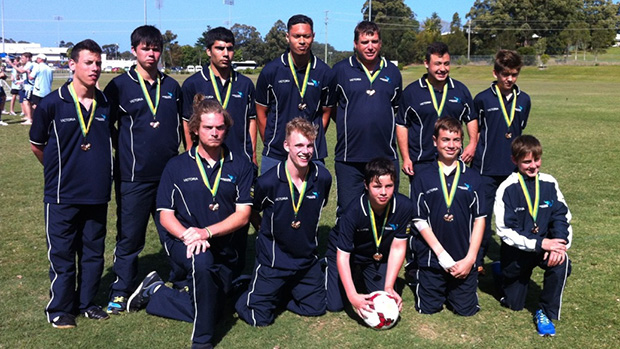